Computational accounts of decisions from experience often treat the information contained in new experiences as a disposable product. They are used once to update running evaluations of the available options, but once they have served their purpose they are simply discarded. When taken literal, these accounts imply that people should possess no declarative memory of the experiences that they have made. In this talk, I present evidence from a reanalysis of the 1.2 million sampling decisions in our meta-analysis (Wulff et al., 2018) and new experimental data that demonstrates that people indeed possess robust memories of experienced outcomes, as well as their relative frequencies, and that these representations guide strategic exploration.  These findings are difficult to reconcile with popular accounts of decisions from experiences, in particular those building on reinforcement learning models, and highlight the need for incorporating an episodic- or instance-based memory system in accounts of decisions from experience.

Decision making under risk is fundamental in humans and other animals. Biologists generally aim at highlighting particular attitudes towards risk (i.e. risk proneness or risk aversion for example) that would reflect naturally selected adaptations to past environmental conditions for a given species. By contrasts with human studies of choice, those studies often fail to consider the interplay between the mechanisms involved in the decision such as the respective role of loss aversion, risk attitudes and probability distortion. In a first part of this talk, I will present data of four ape and two monkey species tested in a food gambling game to uncover the determinants of their gambling decisions. Data were first analysed using CPT and EUT models in an attempt to quantify parameters known to influence decision making in humans. In parallel, we investigated whether some individuals used decisional heuristics to reduce the cost of evaluating odds at each new trial. Data show that several subjects used the Maximax heuristic, focussing on potential gains, while ignoring potential losses. In a second part of this talk, we investigated the response of these species under ambiguous conditions. Subjects were tested in a test very similar to the gambling game but with some information missing. They had no exact knowledge of the odds associated to the outcome of their gambling. Dealing with unpredictability may be more challenging and require more cognitive flexibility. We expected some species to reject ambiguity and/or use even simpler decision rules than under risk. However, under this ambiguous context, individuals gambled as if they had built expectations about the missing information and more so in orangutans, gorillas and chimpanzees. Using decision trees, we could identify each step of the decisional process. Results show that non-human primates can combine several decision rules to make their decision in an unpredictable environment. 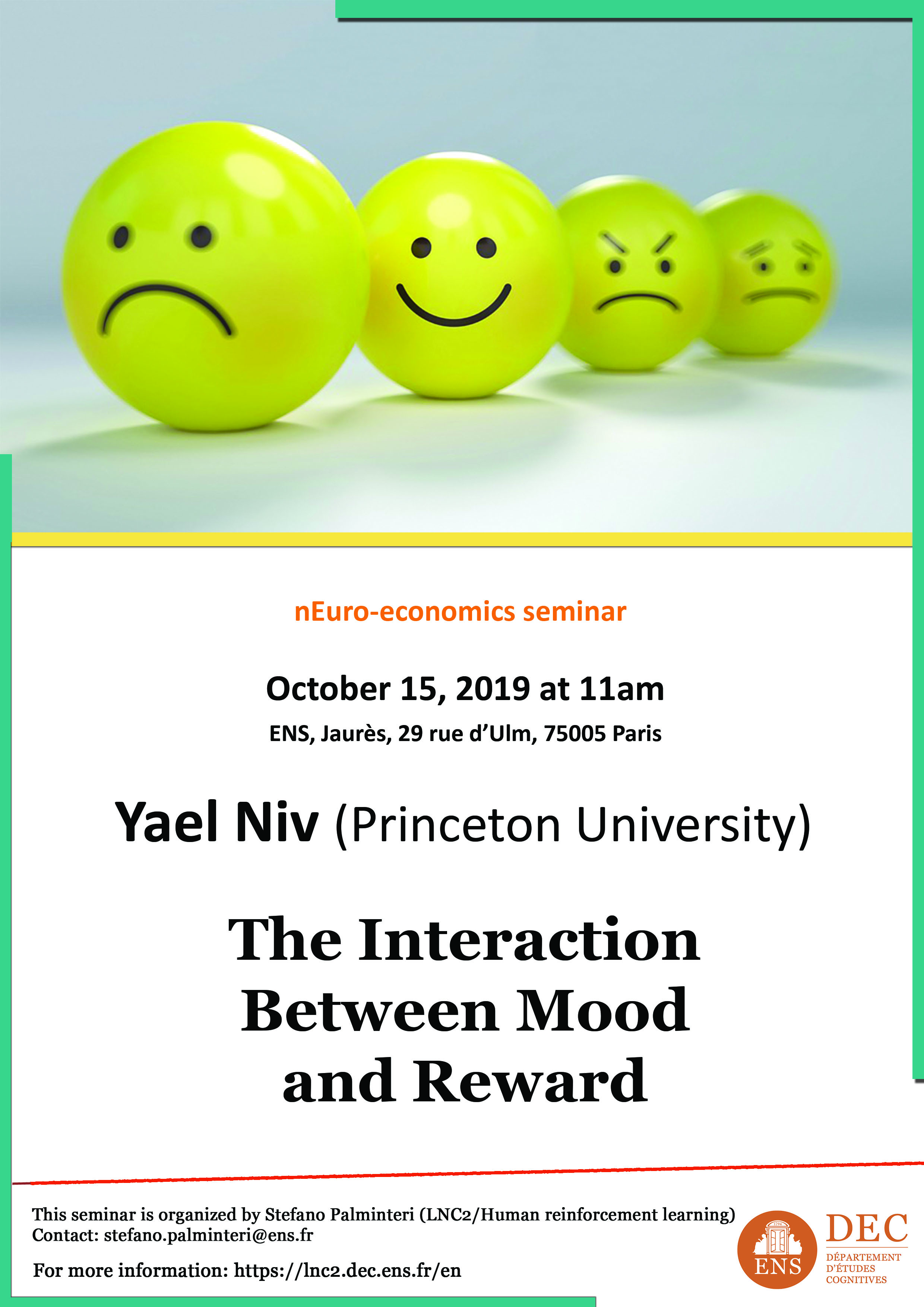 A good mood can be a blessing, but persistent bad moods or mood swings are so detrimental to our well-being that they are at the root of many psychiatric disorders. In this talk, I will present a computational model of mood and valuation that suggests that mood and unexpected outcomes (rewards or punishments) influence each other bi-directionally. After showing empirical evidence for both sides of the interaction, I will discuss the theoretical implications of such a positive feedback loop, especially for pathologies of mood instability. Finally, I will suggest that mood is not simply epiphenomonological, but might play a role in tracking global changes in the environment. This is especially useful in environments with dependencies between different states, and across time (momentum). Properly calibrated, mood may therefore allow rapid adaptation to some kinds of change and generalization of learning from one situation to another. 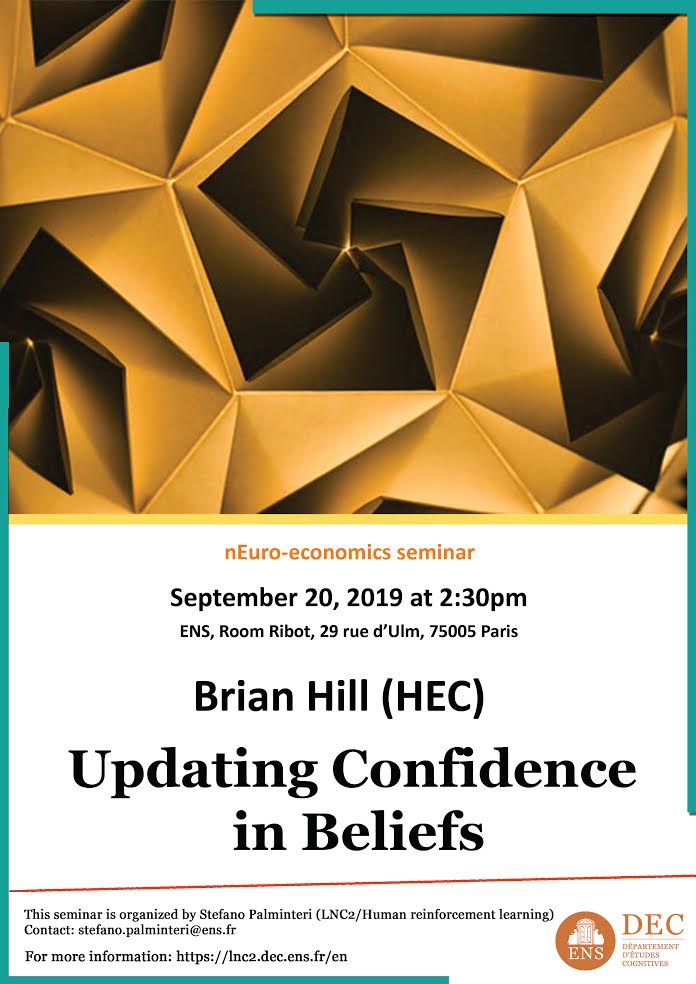 This paper develops a belief update rule under ambiguity, motivated by the maxim: in the face of new information, retain those conditional beliefs in which you are more confident, and relinquish only those in which you have less confidence. We provide a preference-based axiomatisation, drawing on the account of confidence in beliefs developed in Hill (2013). The proposed rule constitutes a general framework of which several existing rules for multiple priors (Full Bayesian, Maximum Likelihood) are special cases, but avoids the problems that these rules have with updating on complete ignorance. Moreover, it can handle surprising and null events, such as crises or reasoning in games, recovering traditional approaches, such as conditional probability systems, as special cases. 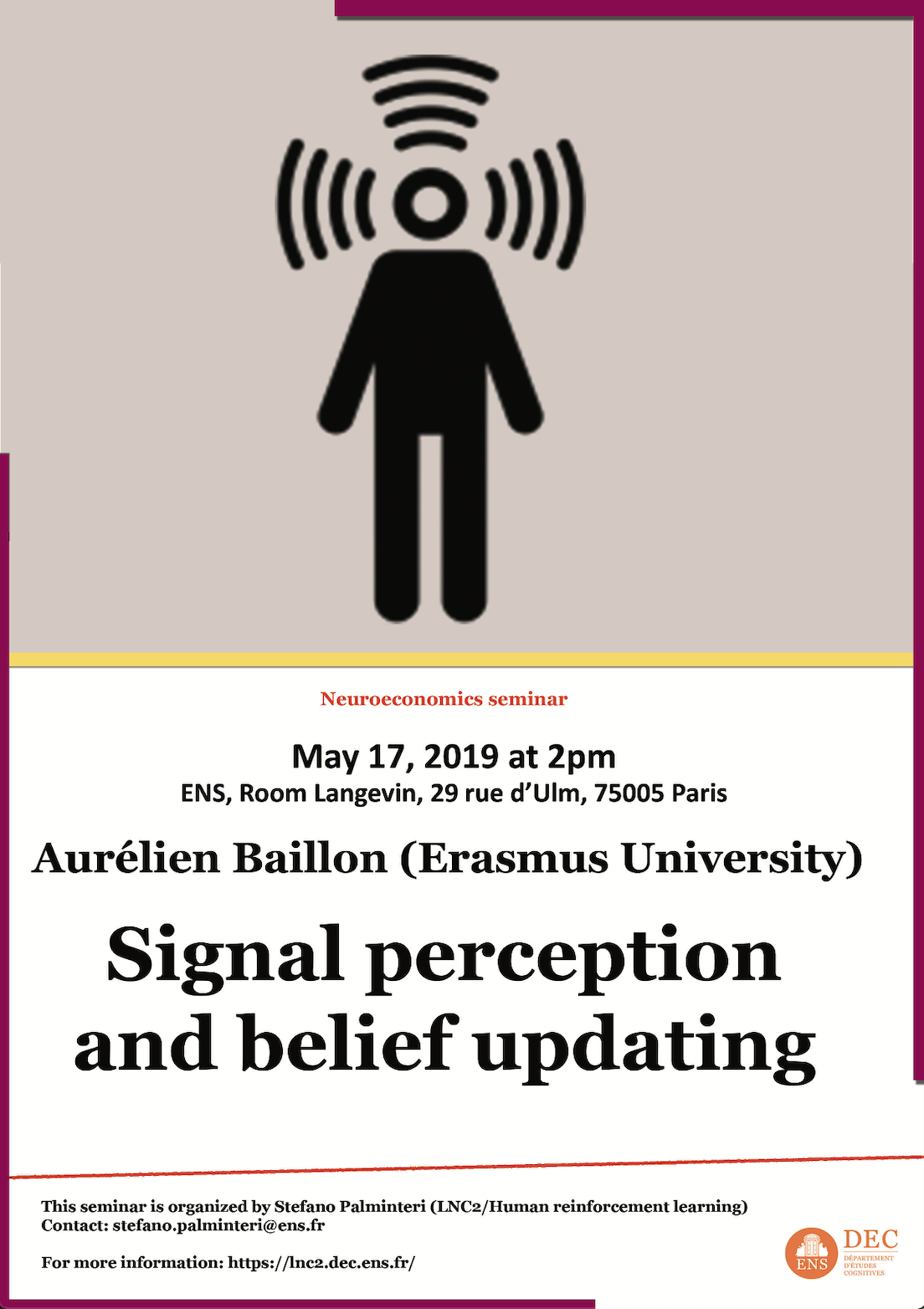 This paper introduces a theory of signal perception to study how people update their beliefs. By allowing perceived signals to deviate from actual signals, we identify the probability that people miss or misread signals, giving indexes of conservatism and confirmatory bias. In an experiment, we elicited perceived signals from choices and obtained a structural estimation of the indexes. The subjects were conservative and acted as if they missed 43% of the signals they received. Also they exhibited confirmatory bias by misreading 19% of the signals contradicting their prior beliefs. 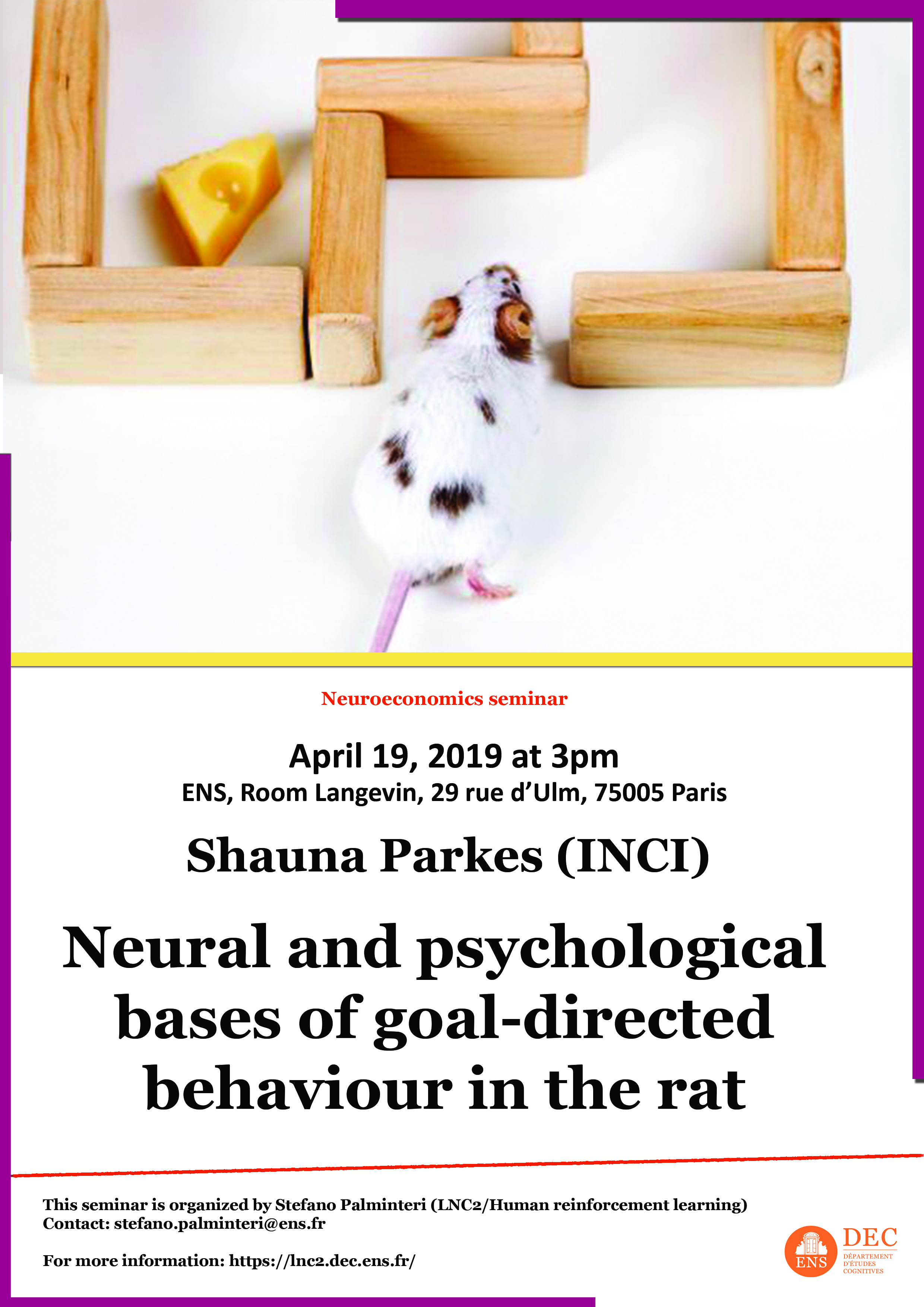 Appropriate decision making is critical for adapting to a changing environment. Every day we must make decisions based on internal goals and the expectation that a given action will lead to goal achievement. Such decisions are experimentally defined as “goal-directed.” Over the years, we have been particularly interested in the neural circuits of incentive learning and memory; that is, the brain regions and circuits that encode and retrieve goal values to guide adaptive choice. Current evidence indicates that interactions between the insular cortex, the striatum and the amygdala are crucial for such incentive learning. Here, I will review evidence from free operant tasks employing causal interventions in rats to outline the distinct involvement of each of these regions, and the neural pathways between these regions, in the mental representation of goal values. I will also share some purely behavioural data examining how context may influence the goal representation as well as the effect of environmental factors such as diet on the balance between actions and habits. 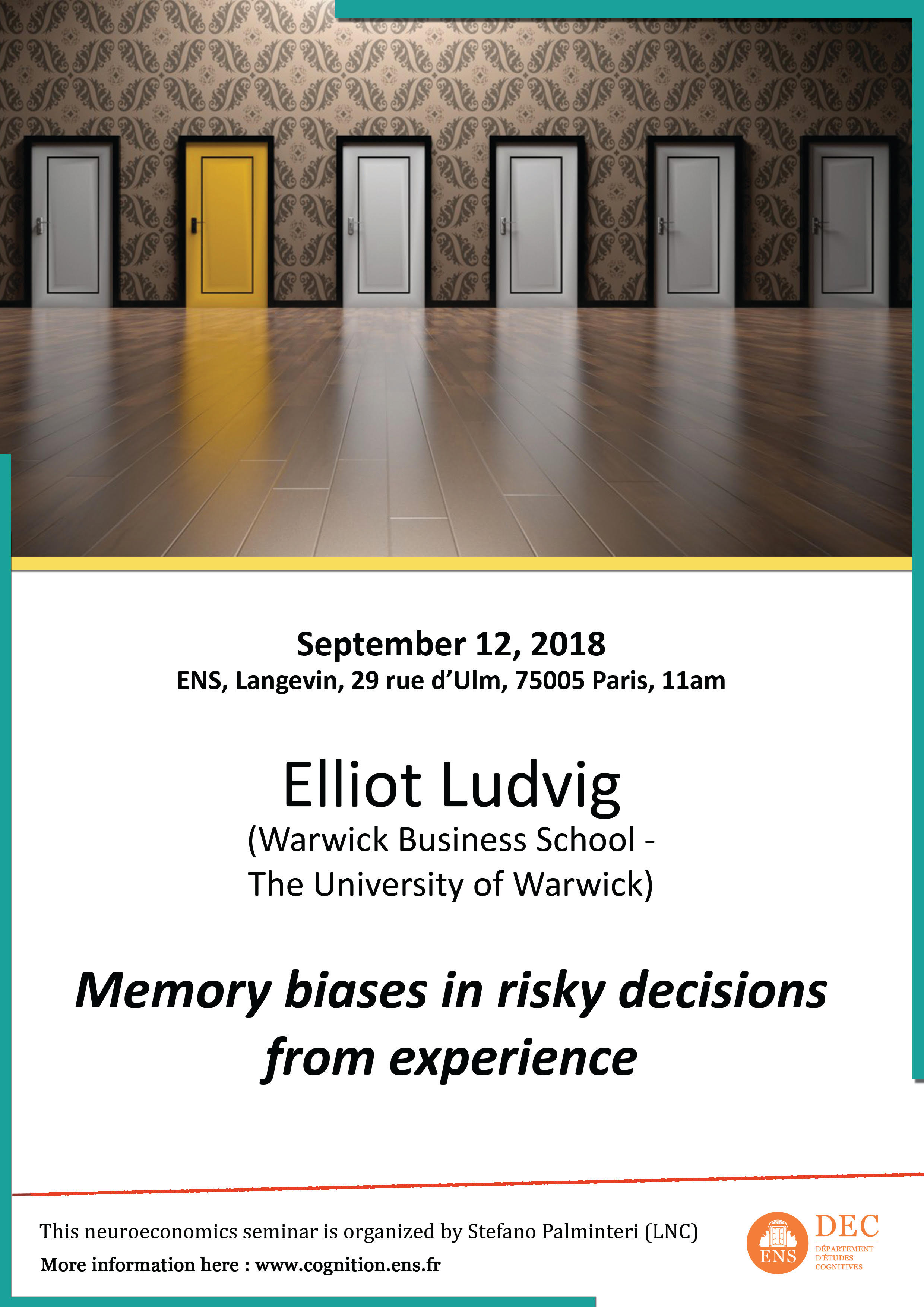 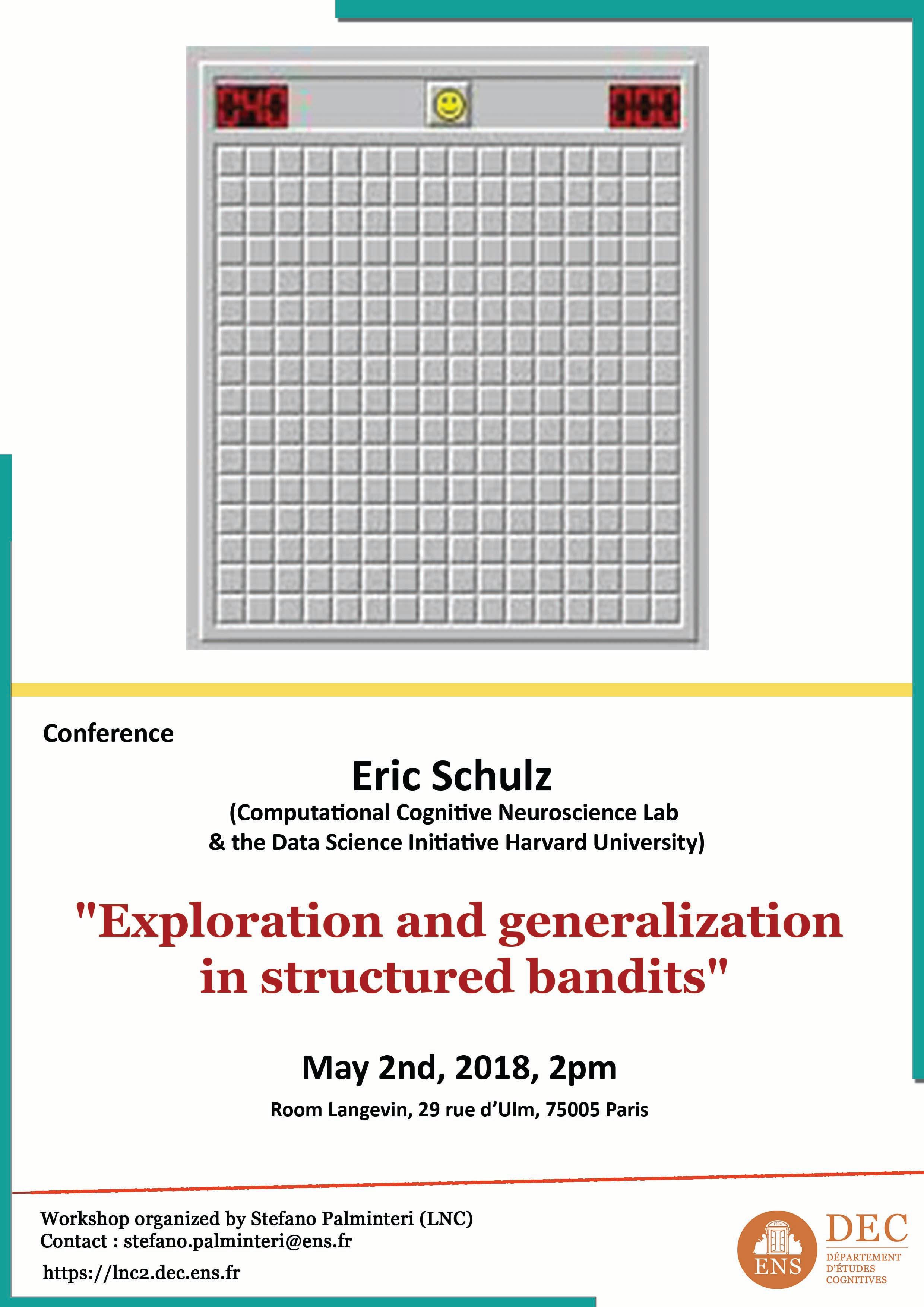 3 février 2017, 11h30-12h30, salle Assia Djebar
Uri Hertz (Univ. College London): "How to influence others and get approval from your granny: The neural computations underlying strategic management of social influence" 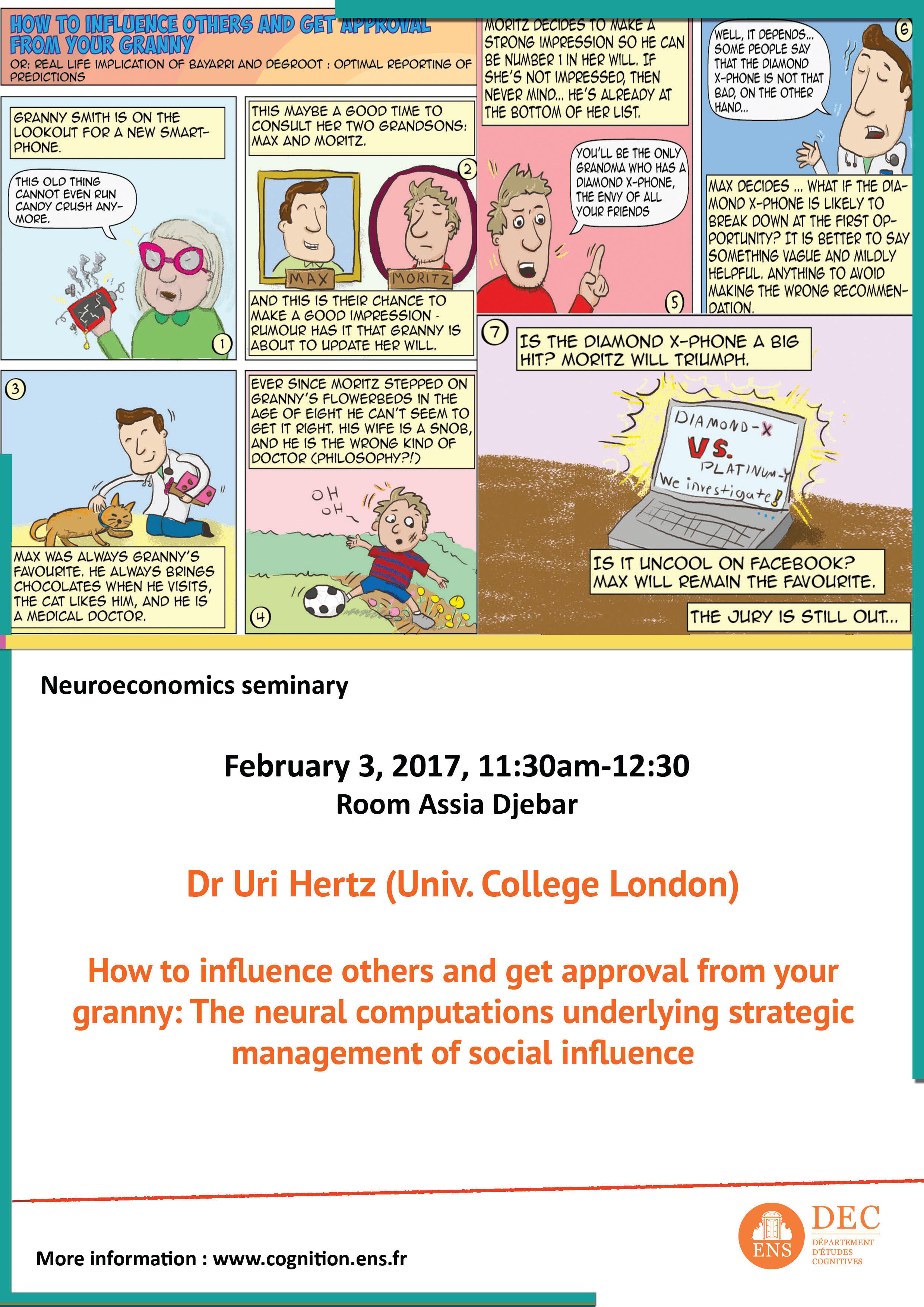